The glossary is made up of technical terms that serve as a shortcut to aid discussions about the complex expression of the art. They are not one specific thing and are meaningless by themselves; they have to be read and understood in relation with other concepts, under a variation of contexts. The purpose of the list  is to make the blog posts easier to follow. The list is, by no means, exhaustive, and I will add on further items, depending on the flow on the posts or where my thoughts are taking me. To make it easier to understand and comminicate, I will put the English interpretations first, then the Chinese source words and the pronunciations, and followed by a brief discussion.

–Body movement here does not mean the mere activities of the body parts,  but the movement of the whole body across space and time in a orchestrated manner. In order to move efficiently, safely, and, above all, with the ability to produce timely reactions, one’s body (or body parts) has to move in sync and in rhythm, with the right twists and turns to store up energy in a natural flow, so the movement(s) is logical and without giving away any intention. In contrast, movement without body turning and twisting, take for example, feet moving forward while the body core is upright and squared, is to be said without Body Movement.

-A general term in archaic Chinese to describe “all encompassing”. The most common usage of it is used to describe directions: up, down, left, right, front, and back. In the Six Harmonies Style of the Mantis School, the term is used to describe the interrelationship between mind and intent, intent and breathe, breathe and force; hands and feet, elbows and knees, shoulders and hips: these connections combined as one is thus called Six Harmonies.

That said, however, when one is engaged with an opponent, mind and intent should cease to exist, as explicit thinking and intent will slow down and give away your movements, while breathe (breathing rhythms) and force are just the outcomes of effective Body Movement and the natural and logical flow of body structure during engagement. The more important thing is, thus, getting the Body Movement right, and it is more useful to think of Six Harmonies, if it is to be used as a useful description of a concept, as the combination of hands, feet, elbows, knees, shoulders, and hips: each of these has a left-right composition, and together they make six.

This idea is more useful as the left-right compositions move in the opposition direction when the parts are moving in sync and in rhythm. This seemingly contradictory movement lets the body store up energy naturally, and, at the same time, allows the body to flow logically. This also gives rise to the idea of the Conflicting Force, which is essential in terms of opening the opponent’s defence and determining where your body would go, be it attacking or defending.

-Literally, the term means catch and grab in Chinese. Like wrestling, it is a method of combat in really close quarter, in between striking range and wrestling range, and it is coupled with throws and take-downs as well. Unlike, wrestling, however, it involves locking of the joints to inflict pain on the opponent, which is forbidden in a wrestling match. Grappling is easy to learn but difficult to master. That is because when two combatants are actively trying to strike and avoid getting hit, their minds are set to exploit openings. Grapples are counter-intuitive in this context, as a grab means fixing an arm to a point. The way to do grappling is, therefore, not think about grappling at all. What one needs to do is to follow a natural course of action in terms of strikes and take targets of opportunity, such as fingers, and use what is given by the opponent. There is also no forms in grappling, as one cannot practice the moves on their own. In order to gain mastery in this skill, the practitioner has to have a thorough understanding of body physics/mechanics and the pattern of movements, and once they have attained this level of skill, they are free to grapple however they want. 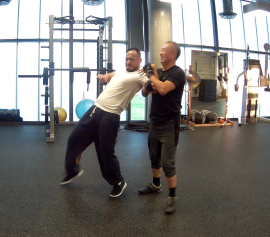